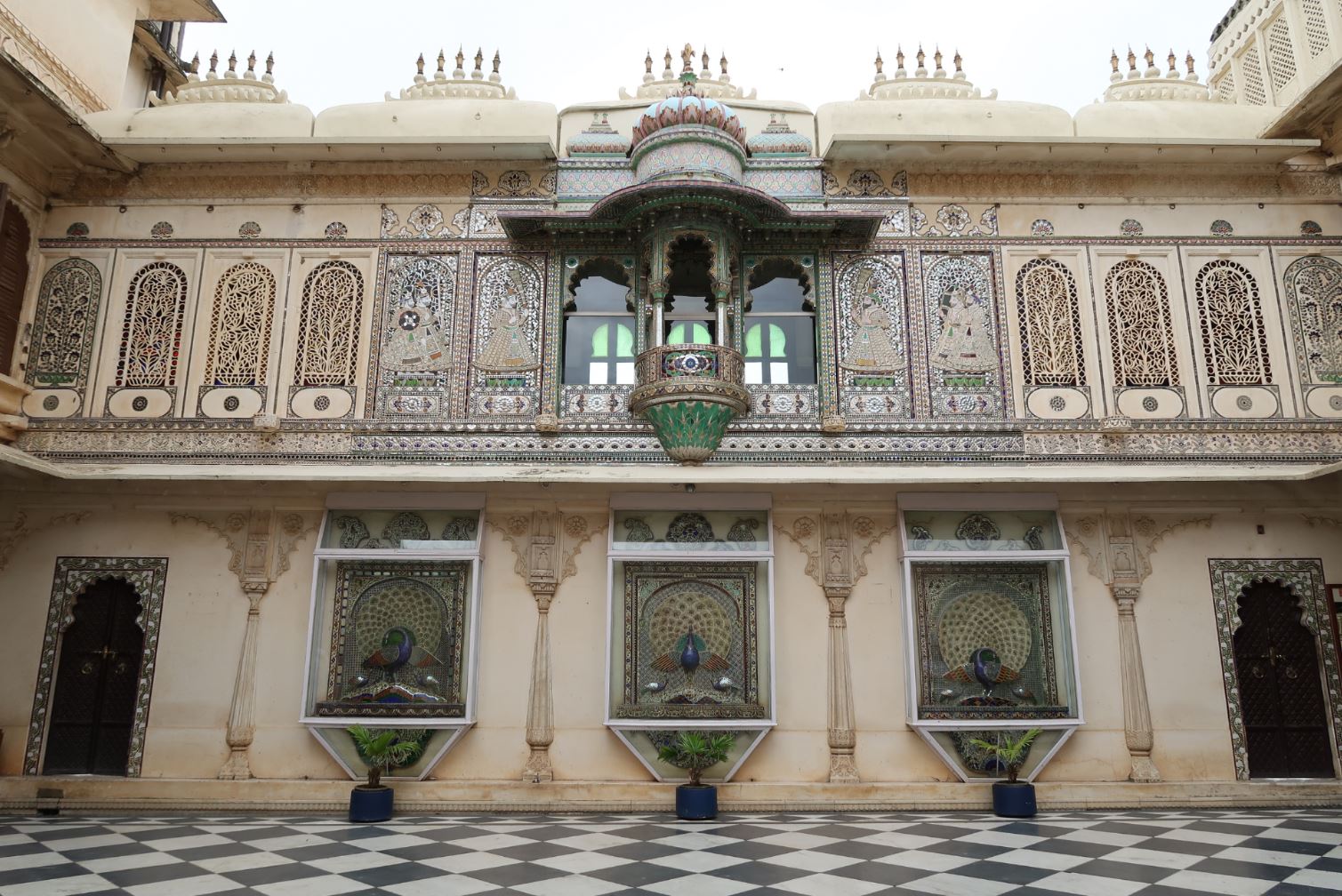 Petra-Durra, and the hidden staircase: Mor Chowk like never before!

The iconic courtyard of Mor Chowk, at the grand City Palace of Udaipur, host to some very important and special guests of the Maharana of Mewar, was renowned for its Petra-Durra works. The Petra-Durra or glass inlay was a speciality of the region, back in its day! To those unfamiliar with the courtyard in question; it is a small, open aired courtyard. On one end it has a room called Surya Chopad with the large sized, gold plated sun motif; an icon of worship, and on the other end, Manek Mahal; a dining arrangement for the ruler and his men, with traditional Indian-style floor seating. The Mor Chowk is a breath of fresh air, for visitors at The City Palace Museum, Udaipur, with its peacock motifs in the choicest colour-glass inlay work. 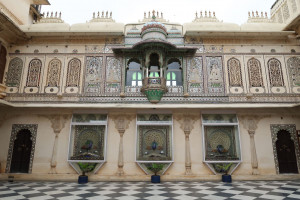 With time of course, natural factors including hail, rain and sunshine, got the better of it. We received requests from tourists to have it restored, even if it meant to charge them the extra money. This was going to be a big project for which Shriji himself would have to come up to Mor Chowk, at the early stage, to look at and evaluate the damage at hand; that itself, was a big task! However, he agreed and came one day. He looked at the cause of damage and suggested that we should first install sunshades, before the commencement of any conservation or restoration work, otherwise it would be damaged again. He wasn’t concerned about the cost and never went into questions to that end as he felt it was necessary to undertake this work, at whatever the cost that may be.

Up went the scaffolding and so began the work! This goes back to the year 2004-2005. The masonry work of installing the sunshades started first, and then we undertook the glass inlay work. Luckily for us, we found the right artisan to undertake the task, and he had all the coloured glass material needed for the same. It required a lot of patience and had to be done inch by inch. After a dedicated, painstaking 14 odd months, the work was completed. 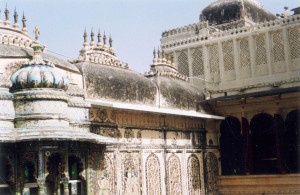 To top it, some 29 pieces of missing gold-plated, copper finials were replaced with new ones on the roof of the Surya Prakash passage. The Surya Prakash forms a part of the façade at Mor Chowk; all of this was done to ensure a complete job, from top to bottom.

In other finds, around the same time, we discovered a hidden staircase! This discovery occurred during a site survey, prior to some renovation work. When we viewed Manek Mahal externally, we realized there was a blank space of about 12-15 feet between it and the other space requiring renovation. What was it? We got the masons to explore this space and there we beheld, a staircase, hidden away for years unknown! 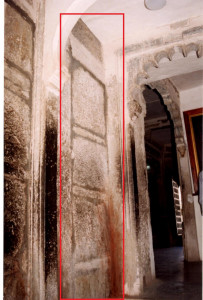 The blockade at Salehkhana, near the entrance gate of the Museum building

This was very exciting news and it was decided to open up the space further to see where it led to. We found a spiral passage going up to Manek Mahal and at the other end, the zigzag passage went down to the entrance of the main Museum building. No one knows for how long this had been blocked by solid stone work or why! 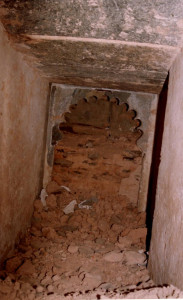 Bricks and stones blockade at the Salehkhana end

This was a great find and eventually it was opened up, after cutting the stones. 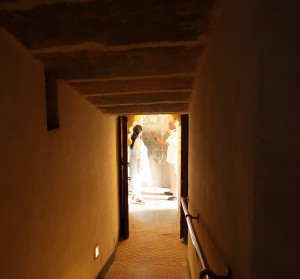 Bricks and stones blockade at the Salehkhana end

At the Manek Mahal side, we had to redesign the glass inlay work when the passage was opened. The staircase continues to remain a secret for most of our visitors; opened up only occasionally to receive special guests and dignitaries, to the beautiful venue of Mor Chowk. 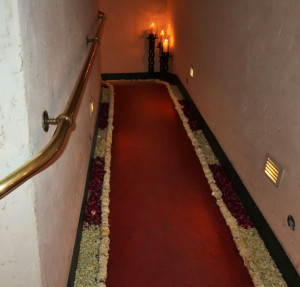 Passage leading up to Mor Chowk, ornate with flower petals on either sides, and candle light 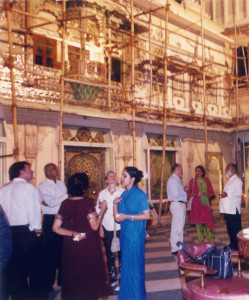 Me (2nd from left), my daughter, Raksha Singh (centre) and Shriji (extreme right), with guests

At the end of this project, we saw the coming together of several such guests from across the globe, to admire and celebrate the resplendent beauty of Mor Chowk that was now restored. It was an honour for me and my daughter, Raksha Singh, the then GRE in Fateh Prakash Palace, to be a part of this gathering, with Shriji Arvind Singh Mewar of Udaipur. 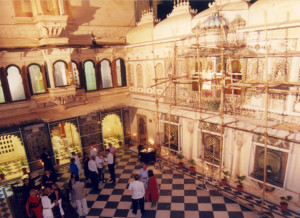 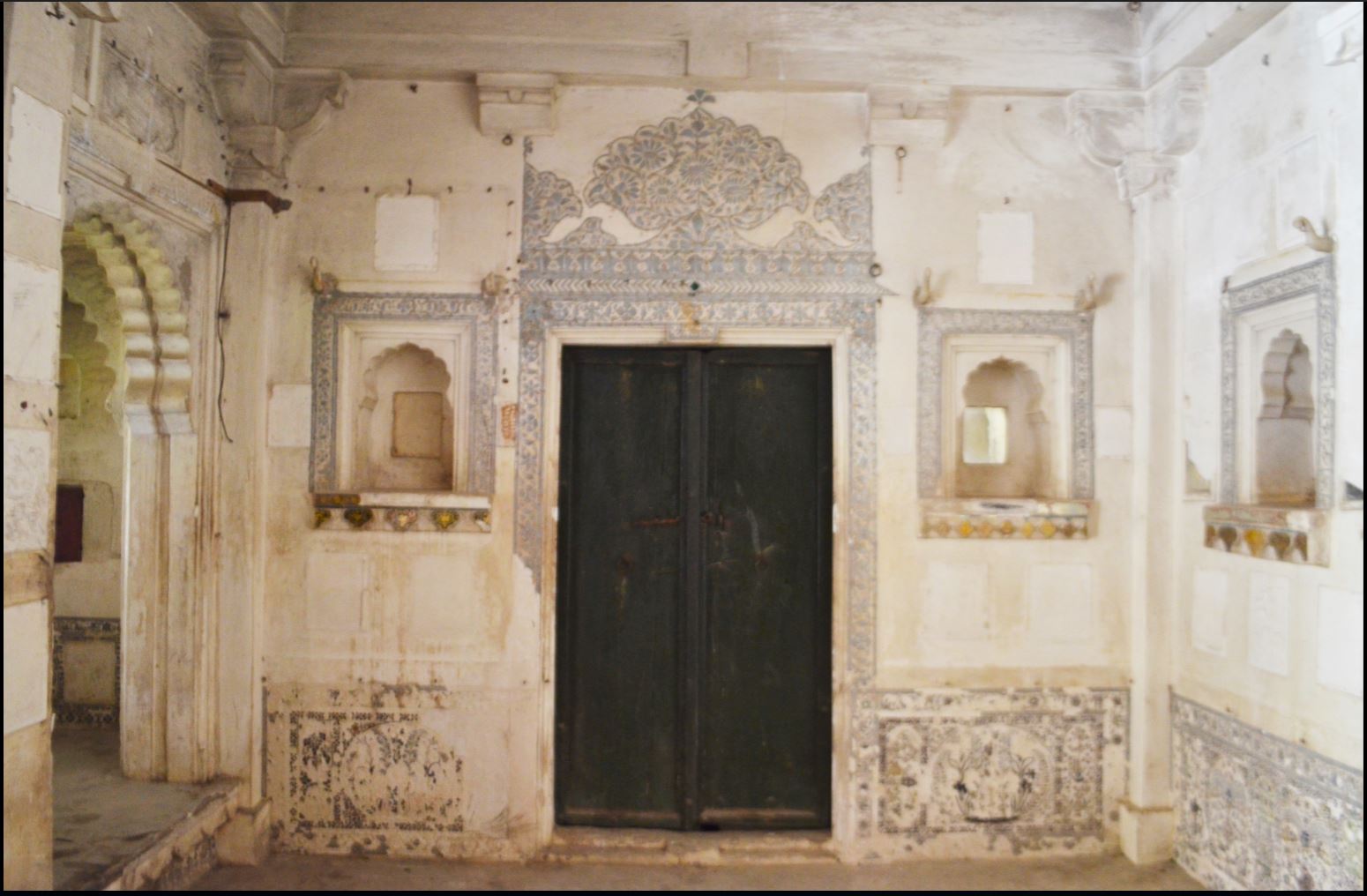