The area between Badi Pol, the main entrance gate of the City Palace, Udaipur and Tripoliya, the triple arched gate, was known as Hation ka Halka or the Elephant Zone area. The elephants used for royal rides were tethered here to their stone post which is still visible. On the west of Trpoliya there is a stable where the elephant, that used to be the first in the Maharana’s procession carrying ‘Nissan’ the Royal Standard was kept. To the east of Tripoliya there was the pen where female elephants with their calves were kept.

The building on the west of the elephant zone was used as the departmental building for all necessary requirements for the up-keep of the elephants, including their items of caparison, jewellery, elephant seats both for ceremonial use and hunting, (howdah and faarki) etc. The person in-charge of this department had his office here. As you enter the Badi Pol on the west near the ‘neem’ tree is a huge water tank (now covered) for the elephants to drink from. Next to this was the room (now with The Vijaya Bank), where the Mahawat, (one who controls the elephant), used to stay and here only the bread for the elephants was baked.

Outside Badi Pol on the west and behind the Gulab Swaroop Bihariji temple was the pen where intoxicated or frenzied elephants were kept. In the huge vaults below Manek Chowk (now housing the Maharana Mewar Special Library) fodder for elephants was stored. At Manek Chowk, elephant beds are located. These are still used for the elephants to rest after a tiring day. For elephant fights (a blood less sport), Maharana Sangram Singh II (r.1710-1734), had made a 5 ft tall wall called ‘Aagad’. Of this one wall was near the platform from where the Maharana would sit on the elephant and one near the elephant stable which is still in existence.

In the elephant zone at least 10 to 12 elephants were always kept. Rest of the elephants were kept at Manek Chowk or in the closeby ‘Hastishala’ (elephant stables). During the reign of Maharana Fateh Singh (r.1884-1930) there were about 100 elephants with the state of Mewar which were reduced to 20-25 during the reign of Maharana Bhupal Singh (r.1930-1955). By the time of Maharana Bhagwat Singh (r.1955-1984), there were still 12-15 elephants which were slowly reduced to just one Royal elephant. With the abolition of Privy Purses in 1971, the practise of keeping private elephants came to an end due to financial constraints. Just to continue with the tradition of keeping private elephants, Shriji Arvind Singh Mewar, the 76th. Custodian of the House of Mewar and in view of the ‘Living Heritage’ of Mewar, has installed an elephant made of fibre to the west of Tripoliya, which has become a great attraction for the visitors to the Museum.

This elephant is 17 ft long, 6 ft wide and 12 ft high, and weighs 700 kg. It has been made by Shri Prafull Kumar Behra of Om Universal Art, Odisha. The making of this elephant took one year and about two weeks to transport it from Puri, Odisha to Udaipur. 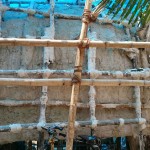 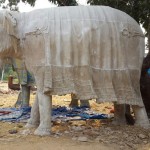 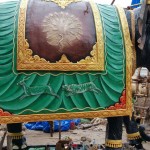 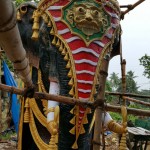 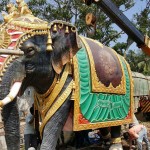 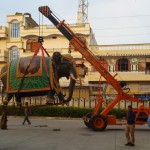 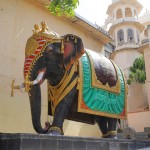 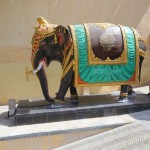 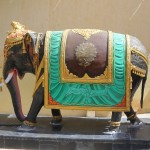 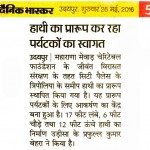 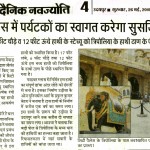 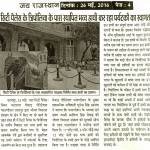 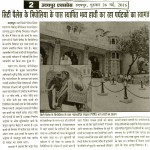