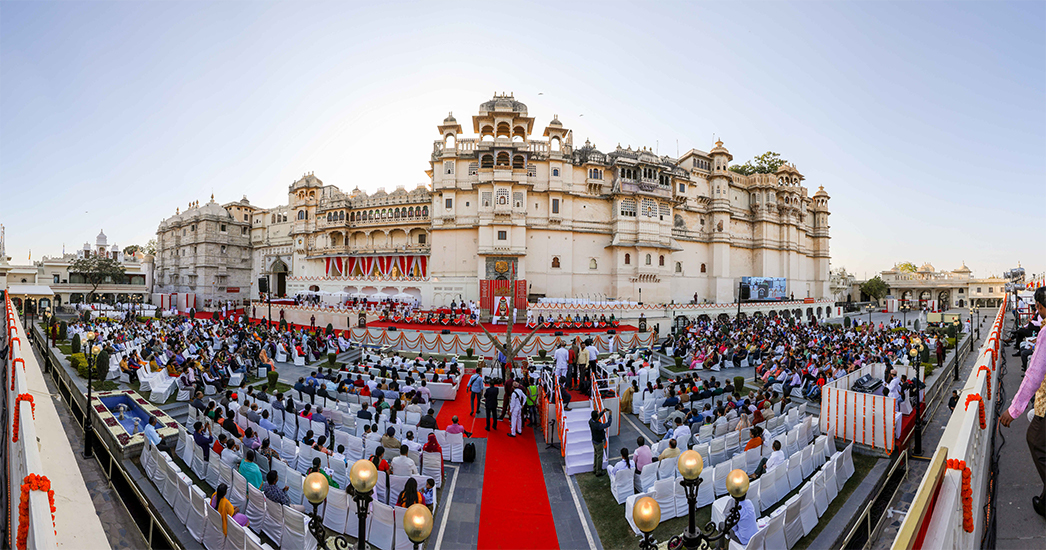 Maharana of Mewar Charitable Foundation (MMCF) has over the years, been committed to nurturing centres of excellence in heritage management, fine arts, the performing arts, education, ecological management, hospitality, philanthropy, spirituality and sports. Unique in having conceived and actualized the practices of ‘living heritage’, the MMCF is sharing ancient legacies through broad-based and sustainable platforms of development within Rajasthan, in India and through global outreach programmes. Over the last four decades, its activities and endeavours have resulted in employment generation, stemming the rural migration to urban areas and instilling greater pride in traditional professions and craftspeople. This approach to holistic and comprehensive development by the Foundation has been acknowledged internationally, most importantly receiving the prestigious WT Award in 2012 at the United Nations General Assembly in New York, for its ‘contribution to universal culture’.

Maharana of Mewar Charitable Foundation pursues its mission of nurturing cultural values in society by adopting innovative methods of communicating and impacting.

Amongst the most important of these is providing recognition of excellence, through appreciation and acknowledgement of achievement through existing pursuits.

This year, Maharana Mewar Foundation 38th Annual Award Distribution Ceremony – 2020, an integral part of MMCF, was held on Sunday the 01st March 2020 at The Manek Chowk, The City Palace, Udaipur. The distribution ceremony starts with the presentation of certificates to students from schools and universities in Udaipur and across the State of Rajasthan. This is followed by the main Ceremony when the international and national awardees gather on the dais to receive their awards from The Chief Guest Dr. K. Kasturirangan, and Mr. Lakshyaraj Singh Mewar of Udaipur, Trustee of Maharana of Mewar Charitable Foundation, Udaipur. The ceremony was graced by Tratiya Peethadhishwar Goswami 108 Shri Vrajesh Kumarji Maharaj, Goswami Shri Vedant Kumarji Bawa Saheb in presence of Shriji Arvind Singh Mewar of Udaipur, Chairman and Managing Trustee of Maharana of Mewar Charitable Foundation, Udaipur.

Announcing the International and National Annual Awards 2020, Convener of the Ceremony Dr. Mayank Gupta said that the international award, instituted in 1996 and named after Colonel James Tod is to honour a foreign national who has made a lasting contribution through his work of permanent value and understanding of the spirit and values of Mewar, Udaipur and India. This year the award is given to Dr. Norbert Peabody. He is working on a re-issue of James Tod’s Annals and Antiquities of Rajasthan based on the two-volumes first edition published in 1829, which will restore the text to its original with engravings, maps, charts, and appendices and with a special focus on Mewar. Dr. Peabody’s Cambridge University entry describes him as an ‘anthropologist and historian, whose research focuses on Indian nationalism during the 19th and 20th centuries.’

The National annual award, Haldighati Award, is given to an individual for work of permanent value that initiates an awakening in society through the medium of journalism. This year the Award is being awarded to Mr. Raj Chengappa, Group Editorial Director (Publishing) of the India Today Group and Editor of India Today magazine. He spearheaded the re-launch of India Today magazine. He is author of the best-selling book titled ‘Weapons of Peace: The Secret Story of India’s Quest to be a Nuclear Power’ that chronicles India’s nuclear weapons history. He was a Nieman fellow at Harvard University, a Harry Brittain fellow for a time at Oxford University and a Stimson Fellow on Security Issues in Washington, D.C. He was a winner of the 2019 National Award for Excellence in Rural Journalism award.

Hakim Khan Sur Award is conferred to Mr. Manhar Udhas, a Hindi and Gujarati language vocalist. He has sung for more than 450 films in Gujarati, Hindi, Punjabi, Bengali as well as in other languages and has released 35 gazal albums. He has effectively used his music with meaningful songs and gazals to establish peace and harmony not only in Indian society but also across the world. He has been performing in concerts in different parts of world to promote this message through his music.

Maharana Udai Singh Award has been felicitated to Mr. Devilal Dhakar, the man who has planted more than 5000 saplings and trees. He has registered and cared for each and every tree keeping a record for all the donors who have supported his efforts in his endeavour to preserve and maintain a healthy environment. The Award is conferred on him for his work of permanent value in protecting and enriching the environment, hand – in – hand with future development.

Another National Award is Panna Dhai Award. This year it is awarded to Ms. Purnota Dutta Bahl, Founder and CEO, Cuddles Foundation, Mumbai who began her journey as a social entrepreneur 6 years ago. Although she had been contributing as an individual donor to the hospital, Ms. Bhal realised that she needed to do more, especially for children who were unable to cope with their cancer treatment because of malnutrition. She left a flourishing career in the corporate world to work with Senior Oncologists at TATA Memorial who developed a blueprint for Cuddles Foundation that would go on to contribute to fight childhood cancer with food and nutrition as part of the healing process. Today Cuddles has partnered with 31 government and charity cancer hospitals across 20 cities in the country, conducting over 1.5 lakh treatment advisory counsels every year. The Award is conferred on her in recognition of her rendering selfless service, rising beyond the call of duty and who sets an example in the society of permanent value through sacrifice, in the face of immense hostility.

Maharishi Harit Rashi Award is being awarded to Prof. Neeraj Sharma, Udaipur who is an authority on Vedic Culture. He is committed to the tradition of academic enhancement, development and the expansion of Sanatan Vedic Culture, Religion, Philosophy and Knowledge. Another Maharishi Harit Rashi Awardee is Dr. Jagdish Narayan Vijay from Tonk the award is conferred on him for his continuous efforts to awaken society through Vedic Culture, Ancient Scriptures and Rituals.

Maharana Mewar Award has been instituted to honour work of permanent value rendered to society, in the field of social service, nation building and character building activities, contributed through educational methods. This year’s award is given to Mr. Dadarao Bilhore, Mumbai, aka ‘the Pothole Dada’. The award has been conferred for his selfless duty towards mankind for his work repairing the dangerous potholes in the roads of Mumbai to prevent road accidents following the tragic death of his 16 year old son near the Jogeshwari Vikhroli link road. Another Maharana Mewar Award was felicitated to Mr. Anant Vijay, Ghaziabad who works on projects associated with communications, literary and educational activities and to Mr. Prakash Chand Sharma who is from Hindaun City, Karauli for his distinguished service of permanent value to serve the society through literature, educational and character building activities.

Maharana Kumbha Award is awarded to Prof. Bhanwar Lal Bhadani, Bikaner a renowned historian who has worked as a Lecturer, Reader and Professor, Department of History, Centre of Advanced Study, Aligarh Muslim University. The award is conferred upon him for his work for his historical research. Another Maharana Kumbha Award is awarded to Dr. Praveen Pandya, a renowned Sanskrit poet, analyst and scholar. His wide spectrum of creativity covers different areas of Literature, Linguistics and the study of poetic structure.

Maharana Sajjan Singh Award is awarded to Mr. Amrit Lal Sirohiya, Jaipur who has been a Gem Stone Carving artist for the past 20 years, he has worked diversely and exclusively to preserve this traditional art form.

Dagar Gharana Award is awarded to Ustad Sabir Sultan Khan an exponent of the Sarangi. His technique of playing is a rare combination of note (sur) and rhythm (laya). He has played for diverse audiences in India and across the world.

Rana Punja Award is awarded to Dr. Mangi Lal Parihar, resident of Bhilwara who works in the Nuclear Fuel Complex, Kota Project of Department of Atomic Energy. He has also diversified to learn many other techniques in health care including Naturopathy, Reflexology, Acupressure and helps patients with backache, spondylitis, frozen shoulders amongst other conditions. Dr. Parihar is an eloquent speaker, instructor, motivator, counsellor and holistic healer using an alternative system of medicines.

Aravali Award is awarded for the outstanding achievements in sports and games from Rajasthan. This year’s Awardee is Ms. Gaurvi Singhvi. Gaurvi is an open water long distance swimmer and the record holder as the youngest in the world who in 2019 at 16 swam the English Channel. She also holds the record of covering a distance of 45 kms in the Indian Ocean from Juhu Khar Danda to the Gateway of India in 9 hours and 22 minutes at the age of 15.

This year Best Police Station of Rajasthan Award was given to Chechat, Kota Rural, Kota, Rajasthan.

MMFA Awards, Udaipur: The 37th Year of Honour and Pride 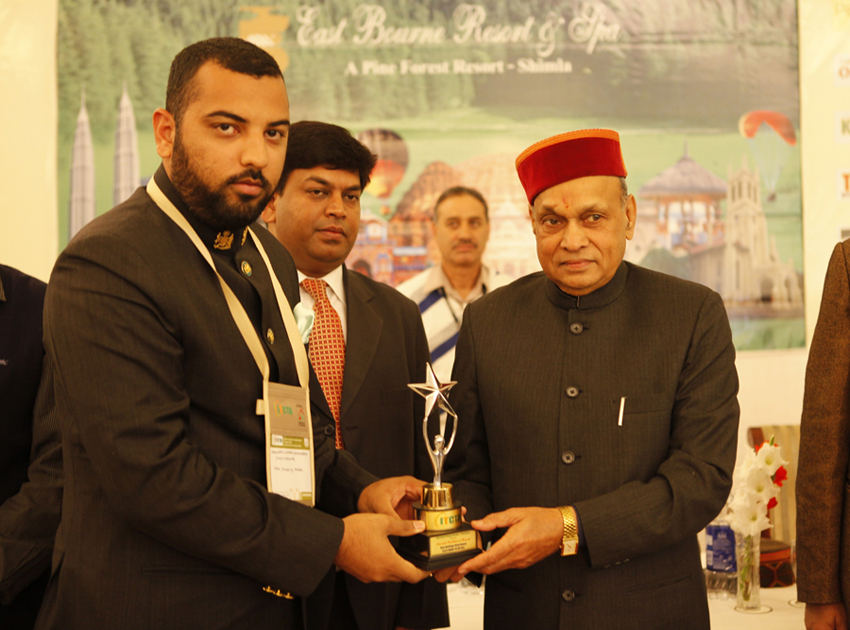